On the 6th of May one of Qualitech Southern vehicles was involved in a serious road traffic accident.

At 5:45 am whilst delivering a load of hazardous waste a vehicle from the other carriageway crossed into our carriageway and hit our vehicle.

Rob Young, Qualitech driver was struck by an oncoming vehicle forcing his truck up onto temporary steel protection barriers and ultimately rolling his vehicle.

Fortunately no-one was seriously injured but there were severe delays to the surrounding road network whilst the fuel and fluids from the tractor unit were cleaned up. The tanker and load remained intact and none of the product leaked from the tanker.

"Again I’m really sorry that your company were involved in this type of incident, wrong place at the wrong time.

Can I just thank you and especially your Driver Mr Robert Young in the professional manner that he displayed himself.

Not only was he involved in a serious collision, but he had a clear method on how to deal with this incident.

His main thought was the safety of the other road users, and how to remove the dangerous goods being carried in his FL1 Tank.

He took measures straight away by calling another colleague to make his way to the scene ASAP to remove the product safely and quickly. 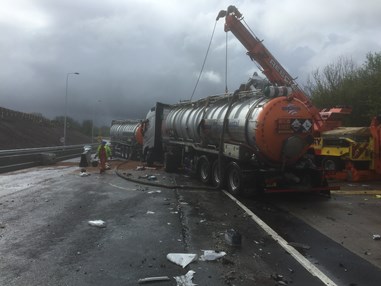 When I arrived at the scene and spoke to Robert his displayed himself in a professional manner with a clear head, considering what he had just been through, I can only take my hat off to him.

Your company liaised with the emergency services straight away, giving assistance at all times when required.

I can confirm that the account given by the NEWS at 10pm on the 6th May was inaccurate, the chemicals that had come from the VOLVO FH12 Index number PN14 HNX, were as a result of the Collison which caused the diesel fuel tank to be ripped from its mountings, the coolant from the engine and engine oil that had escaped from the engine sump.

I can confirm from my knowledge of being at the scene, none of the product UN3266 had leaked onto the carriageway.

Can you pass on my thanks to all of your company representatives for all their help and assistance in this incident."

Qualitech would like to thank the members of the public who came to the aid of Rob and to the Emergency services who provided vital support to the recovery operation.